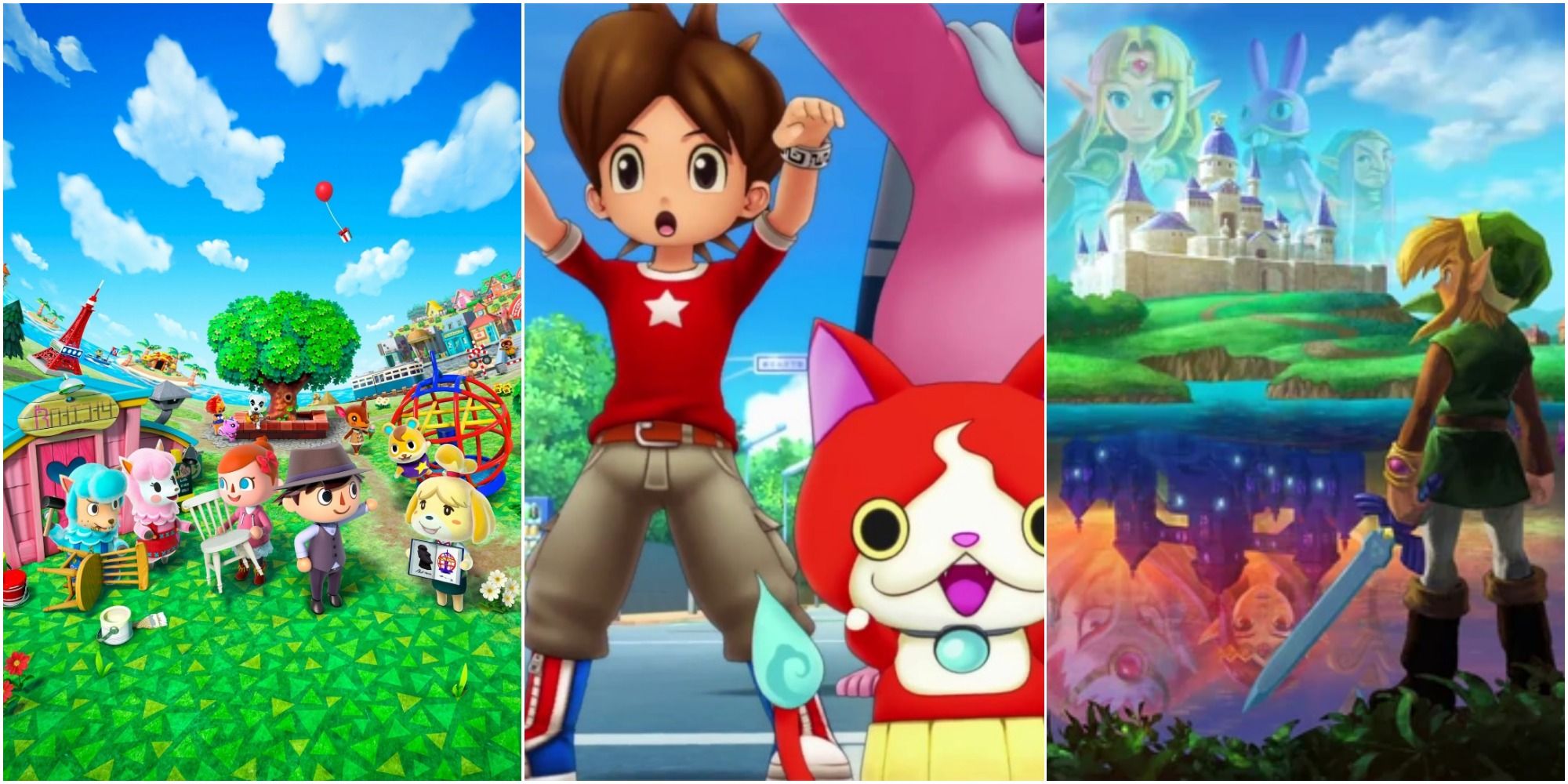 The Nintendo 3DS pioneered handheld gaming due to its stereoscopic 3D hardware, giving the illusion of depth for many games. This console was built on its DS predecessors, allowing developers to use its beefed-up hardware for more ambitious graphics.

Similar to the DS, the 3DS has a large library of games, many of which have excellent graphics that showcase the triumphs of this little handheld. From the most popular triple-A series to underrated hidden gems, the console has plenty of high-quality experiences to offer on the go. Despite its small size, the Nintendo 3DS stands out because of the way it uses its own limitations to give you a truly unique gaming experience.

Set in Paris, this rhythm-puzzle game puts you in the shoes of a thief trying to uncover the mystery behind his father’s disappearance, alongside your trusty canine companion, Fondue.

If you’re a fan of rhythm games, Rhythm Thief & The Emperor’s Treasure is a must-play game, as it’s one of the best of its kind on 3DS. Its fun gameplay, amazing soundtrack, and enjoyable story are only enhanced by the game’s clean and stylized graphics. Lace up your dancing shoes when you hit town in this unique 3DS game.

As the name suggests, Luigi’s Mansion: Dark Moon sticks to the spooky atmosphere the series is known for, opting for dark environments only lit by Luigi’s flashlight. Despite the dark spaces you have to explore, the game’s dynamic use of lighting means the graphics are always bright, despite the darkness.

Cartoon-style graphics lend themselves well to the game’s fun puzzles and often humorous storylines. The exploration of the mansions in the game is all the more scary due to the stylized graphics of the game.

Developed by Level 5, the Yo-kai Watch series is full of personality. The first entry in the series set the standard for this charming RPG, letting you befriend and fight alongside Yo-kai. This fun concept is made even more enjoyable with the game’s colorful graphics.

The vibrant backgrounds and awesome battle animations help elevate this entry, making it one of the best looking 3DS games available on the console. Level 5 is known for its attention to detail and Yo-Kai Watch is certainly another example of its brilliant workmanship, with its crisp 3D graphics that show off both style and technical ability.

7 Pretty as a Picture – The Legend Of Zelda: A Link Between Worlds

Set in the same world as A Link to The Past, A Link Between Worlds shows just how far The Legend of Zelda series has come, especially in terms of graphics. Remakes aside, it’s also one of the few mainline games made specifically for the Nintendo 3DS system.

The game lets you explore the realm of Hyrule, as well as its Lorule counterpart, through its polished 3D graphics. Traveling between the two worlds is a treat, and it’s great to see Hyrule from A Link to the Past fully realized in 3D, with the added bonus of new content for you to enjoy.

Released four years after the series entered the Nintendo Wii, Animal Crossing: New Leaf brought the experience back to handheld consoles, dramatically improving the graphics. New Leaf has improved the series’ graphics without sacrificing the stylized approach that Animal Crossing games have become known for.

Although the graphics were a definite improvement, they are still instantly recognizable as part of the series. New Leaf’s pleasing graphics keep you coming back for more, as you decorate your town to its full potential. Even if you return to your city many years from now, the graphics will still charm you.

5 Not a Myth – Kid Icarus: Uprising

Loosely based on Greek mythology, Kid Icarus: Uprising has you teaming up with the goddess Palutena in your quest to stop the evil Medusa. Using the power of flight granted to you by Palutena, Pit battles enemies both on land and in the sky, making the most of the console’s 3D stereoscopic hardware to add depth to the game’s original mechanics.

The game’s superb cast of characters and imaginative enemies look fantastic on 3DS. Each chapter of this game is light and fun, matched with the vibrant and colorful graphics.

4 I have to come down on Friday – Attack of the Friday Monsters! A Tokyo Tale

This adorable adventure game lets you explore a rural Tokyo town through the eyes of a little boy named Sohta. In this city, superheroes and monsters face each other every Friday like in a TV show.

Despite the game’s short duration, Attack of the Friday Monsters! keeps you glued to the screen, thanks to its beautiful illustrations that help this small town of Tokyo come to life. The graphics in this game portray his childlike nature, as everything is idyllic and carefree in Sohta’s hometown, despite the monsters battling every Friday. This hidden gem is a delicious slice-of-life adventure not to be missed, especially if you love a good card game.

3 Timeless Remaster – The Legend of Zelda: Ocarina of Time 3D

Although both versions of Ocarina of Time have their own strengths and weaknesses, when it comes to graphics, Ocarina of Time 3D perfectly improves this game, using the 3D capabilities of the system. Ocarina of Time 3D is still the game you know and love, but this time around it has improved graphics and quality of life improvements that make this release an interesting experience.

When it comes to getting the most out of the system’s 3D gimmick, Ocarina of Time is one of the best examples on the console. This, in addition to the 3D graphics, makes it one of the best remasters to date.

Resident Evil Revelations is a great example of how far the graphical limits of the 3DS can be pushed, as this game looks fantastic for one released on a handheld console. The thrilling action of this game is enhanced by its incredible graphics, which are surprisingly realistic for the 3DS.

It confirms the gritty nature the series is known for as you explore the cruise ship, Queen Zenobia, which has been overtaken by zombie-like creatures known as Ooze. If you have a 3DS handy, it’s worth playing this portable Resident Evil game, taking advantage of its impressive graphics.

Every installment of the Monster Hunter series that was released on the 3DS featured polished and detailed graphics that helped elevate the series. Moving away from the gameplay of the main series, Monster Hunter Stories instead opts for a more RPG style of gameplay, and its fluid, colorful graphics reflect this shift.

Following the game’s lighter storyline, the art style differs greatly from other mainline entries in the series. Models of refined characters and interesting monster designs help keep you engaged in the story. This game is a breath of fresh air for the Monster Hunter series, thanks to its cartoon-style graphics and refreshing gameplay.

Next: 3DS games are still stuck on the console

Select PS1 and PSP games will soon be sold separately, no PS Plus bonus required

Casey is a first class graduate in English Literature with a love for games and writing creative pieces. After college, she shared her passion for Nintendo, horror games and RPGs through her blog where she writes thought-provoking articles and fun top 10s on a multitude of games. In addition to new games, she loves revisit classics like Silent Hill, Chrono Trigger and Final Fantasy VII. In her spare time, Casey enjoys spending time with her English Bull Terrier, adding to her ever-growing figurine collection, and creating embroidery pieces of her favorite characters.