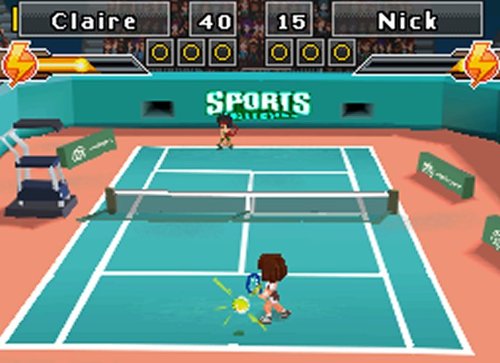 One of the most entertaining games that are generally local cooperative is spot games. However, they are also fun and provide hours of single player entertainment on consoles like the Nintendo DS. This legendary portable console was released in 2004 and became an instant hit thanks to the â€œDual Screenâ€ capabilities, built-in microphone and wireless connection that were revolutionary at the time.

This Game Boy-looking console has forever changed handheld games and if you’ve ever owned one, there’s a good chance you have a few sports games in your collection.

The Nintendo DS can still be fun today, especially if you love to bring back memories of some of the best classics in the sport.

With that said, let’s highlight some of the best sports games for Nintendo DS.

Mario and Sonic merged to create the ultimate winter Olympic game, shortly after their clash in Smash Bros. Brawl. The game was released in 2009 and became an instant hit for Nintendo DS gamers.

Since we are talking about winter sports, the game is all about snowboarding, hockey, skiing, bobsleigh and more. There is a wide selection of mini-games (27) where players can jump into the game by playing with other NPCs.

After each event, you get a score based on your performance in the game, and it’s a good way to spice up the competition with friends.

Want to play soccer in your neighborhood and do some crazy stuff that is incredibly satisfying? Well, FIFA Street is the perfect game for you. This is a game where you can control all aspects of your team’s performance. From shooting and passing to more advanced moves like headers, bike kicks or juggling.

The game has simple button controls where certain combinations lead to awesome ankle-breaking skills (which is probably why it doesn’t hold very good reviews). Still, it can bring endless hours of fun.

FIFA Street 3 features an exclusive Nintendo DS-only mini-game called KickUps where the game challenges you to keep the ball in the air while juggling.

You can also build your team in the Street Challenge mode and improve your reputation by beating the competition, which will unlock new skills and moves.

Let’s cross into the spirit of street sport and spotlight another game taking place in the neighborhood. The best thing about Backyard Basketball is its characteristics like real teams and real players. There are 30 NBA teams and 6 composite teams and more than 18 professional NBA players featured in this game.

The other characters are filled with genres from the Backyard Sports franchise. Considering its cartoonish nature, the game bears a pretty decent resemblance to their NBA counterparts.

The main game is 3v3 street basketball which is played on children’s courts. The game has simple controls where you can shoot, pass, spin, fly, and pump scythes.

There is a shot meter at the bottom of the screen that reflects the power of the throw and the direction the ball is going.

Overall this is not a 2K basketball game with high end graphics and you won’t be able to play with the top 10 NBA point guards but we can still promise you hours of entertainment. .

If you were a teenager in the early 20s, there’s a good chance you’ve played all of Tony Hawk’s games before as they were hugely popular back then. It is one of the best games in the collection that started the movement of handheld consoles for skating games.

Tony Hawk’s American Sk8land is one of the best adaptations of the standard console to the Nintendo DS simply because it has retained most of the original graphics, an innovative look, solid gameplay and, most importantly, online play. .

The game is constantly throwing goals at you for you to complete and most of them are for doing tricks or skating going to different places. This game is more geared towards younger audiences with its easy to understand controls and straightforward gameplay.

It’s definitely a great game that provides a lot of fun behind the Nintendo DS console.