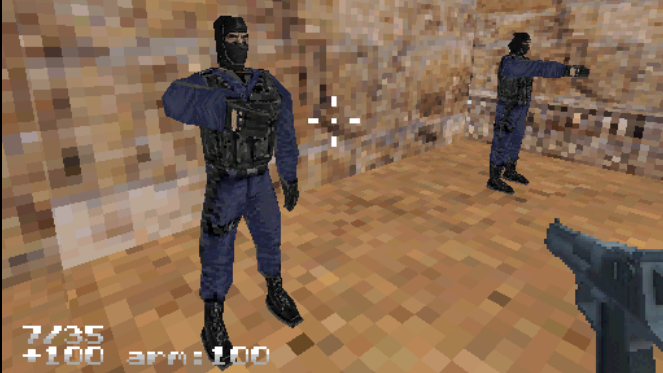 Fewnity is a French coder with a penchant for Nintendo DS projects, who over time builds more and more ambitious projects. Always how it goes: you start off by creating Flappy Bird, and before you know it, you end up with an online version of Counter-Strike running on hardware.

counter strike ds (opens in a new tab) was a project that Fewnity started because he and a few friends liked to play CS:GO, but not everyone had the proper hardware. It’s not exactly a port but a version of the game built from the ground up with the only map you need, Dust 2 version 1.6, which can be played solo with bots or online both in a private party with randoms. This legend even runs its own server to manage it.

“I’ve never played Counter Strike 1.6,” says Fewnity. “I only play CS GO because it’s the only CS I own haha.” As for the nature of the project, he writes “I think Demake is more accurate, but the port is good for me too”.

You may have seen previews of this project before: Fewnity has been working on Counter-Strike DS for a few years and has released screens before. But this year saw things kick into high gear with the release of a public alpha, then the gradual addition of core features like a buy menu, before it went live and 1.0 ago. a few weeks.

Most impressive to me, in what was already an extremely impressive project, is that this version of Counter-Strike uses the DS touchpad to aim and fire, as well as the incorporation of a tap-to-jump command . Fewnity also has a version of this running on Vita which is apparently cross-play, which is pretty wild, although it hasn’t been released to the public yet.

There are other neat elements to this, such as custom button remapping, and Fewnity said they will continue to work on this beyond 1.0. The game download page (opens in a new tab) has instructions on how to make it work on both DS hardware and other means, and you can see Fewnity’s other projects here (opens in a new tab).