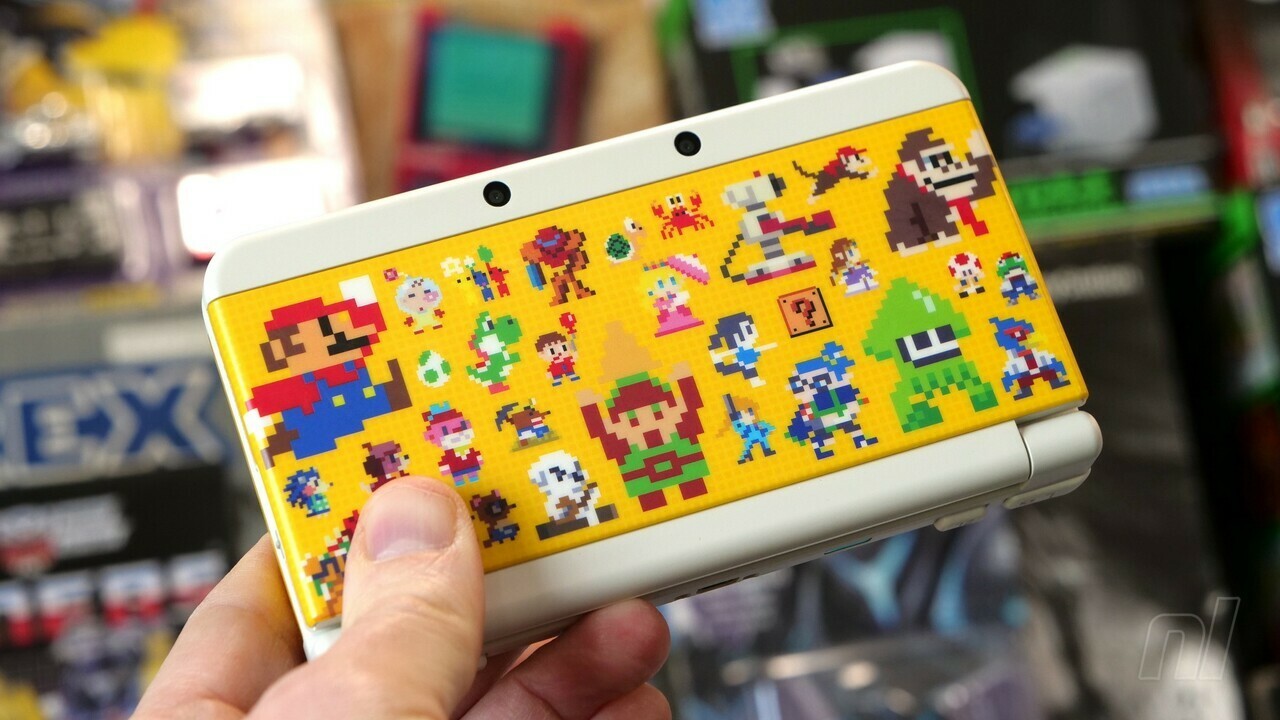 Nintendo 3DS features that really should be on Switch – Talking Point

2021 is the 10th anniversary of Nintendo 3DS, a cute little console that helped Nintendo through a somewhat eventful 2010. Its companion home system, the Wii U, wasn’t that hot, but the 3DS spent much of its time hosting blow after blow. Mixture of console and handheld, the Switch is the successor to the 3DS, but only because it is portable. It’s quite surprising how many fun features of the Nintendo 3DS have been left out for the Switch altogether. So, for its 10th anniversary, we wanted to look back at all the cool features the 3DS has to offer that the Switch has left behind, and see if there’s a way to bring them back in the future with Nintendo’s new console.

For starters, let’s take a look at what the Switch already has, other than just having games and an eShop, because there isn’t much. It has a Mii Maker like the 3DS, although it’s hidden in the system settings, an app for Nintendo Switch Online (which is actually just a gateway to games exclusive to the service), the album where all your captured screens and videos go, and a basic activity log in the player profile.

Speaking of which, let’s start there …

The Switch’s current activity log is really basic, showing you only the last 20 games you’ve played and vaguely how long you’ve played each. It’s a massive go back to what the 3DS offered, where the system not only tracked how much you played the system daily (and what games you played), but also kept track of details like total time played, time played. average game, the number of times the game has been played, and when you first and last played the game.

These details could then be listed so that you have a clear idea of â€‹â€‹who you were as a player. We would never have known that it took us 255 hours Fire Emblem: Awakening without the app, and we find it fascinating (and perhaps a little unsettling). The Activity Log was a cool feature, and we just don’t understand Nintendo’s half-hearted approach to Switch. That would be simple to add, as the Switch is already tracking play time. It just needs a more customizable interface, and you’re good to go.

Another feature of the activity log was that it also served as a pedometer, recording the number of steps the player took each day. This was a recurring theme on 3DS, as Nintendo took a lot of steps to encourage gamers to walk around and take their 3DS systems with them. Considering that Nintendo’s grand marketing strategy for the Nintendo Switch was to show that it was a home console that you could take with you on the go, it’s a little shocking that the system is really lacking in anything. thing like that.

Yes, we are aware that people have been waiting for cases since the Switch arrived, so it’s not like it’s a new request. However, given that the console is now four years old and, if you have owned one since launch and have a massive MicroSD card, you will probably have a lot of games, some ways of organizing them in folders would indeed be very convenient. We’re not experts in the matter, but surely this is something Nintendo could introduce without too much trouble? After all, our smartphones have had application folders for years.

As for the themes, again, this is something fans have been asking for for some time. You could argue that the themes were slightly underused and underrated on 3DS, but they really made the console more unique – and provided the ability to hear the Mega-CD boot theme every time you turn on your 3DS. What more ? Since the Switch has a “themes” menu, we imagine this to be an easy fix as well – having only offered a meager pair of theme choices since 2017, it’s high time Nintendo use this option more.

The most robust and polished side app on the Switch is the ability to take in-game photos and videos and upload them to social media. It replaced the Miiverse function and makes sharing your gaming experiences much easier. Images and videos can also be edited with text stamps and footage cropping, but that’s kind of where it ends. This is once again a step back from what the 3DS offered with its Camera and Screenshot app (albeit with only certain games).

There was also the 3DS audio app where users could not only record their own sound and music using the 3DS microphone, but also manipulate, edit and share them through Streetpass or Redeem Note, a messaging application that was also not chosen for the Switch. Moreover, this app could work as a music player, allowing users to store music files on SD card and listen to the songs while the system was in standby mode.

It’s understandable that these apps weren’t just transferred to the Switch at large, as the system doesn’t have a built-in camera and microphone. So you cannot take photos and record videos and music. However, the editing features on the Switch are lackluster compared to 3DS. You can control the playing speed of the videos, change the pitch of the sound, and even play the video backwards. Editing images gave you access to stamps, as well as options for drawing and playing with the depths of images. It was simple and the DSi had even more options than that!

There are also some easy ways to fix this problem. Super Smash Bros. Ultimate actually has its own video editor which would work great for videos recorded on the Switch. It can’t be that deep, but it would allow more options like zooming in, making edits with multiple clips, and other basic video editing features.

Sound could also be processed on the Switch. Imagine recording a video on Switch, removing audio from it, and editing it separately to create something creative. It could then be transferred to your PC or phone and shared as you want. The 3DS had the power and the ability to deliver that, so there’s no reason the Switch couldn’t do it so well.

Many of the best features of Nintendo 3DS have been incorporated into the handheld’s largest portable aspect: StreetPass. This passive feature was able to detect when you passed other Nintendo 3DS in the wild and sent data from their system to yours. It could affect many games, like activating Dark Link Battles in a link between worlds, or spawn a stranger’s Mii as a runner in Mario kart 7, but what he’s best known for is the dedicated Streetpass Mii Plaza app.

The StreetPass app is where the Miis you’ve collected hang out and support you in a variety of games. This can be something simple like handing over a puzzle piece for the Puzzle Swap app or offering some type of bait for StreetPass Fishing, to more complicated games, like joining your RPG party to save the nobleman captured in StreetPass Quest, or become an extra ship in the shoot ’em up StreetPass Squad. These games were really fun, and the StreetPass Mii Plaza is actually our most used app on 3DS, beating Fire Emblem: Awakening by over 100 hours.

This is definitely the biggest missing feature from the Nintendo Switch, and we kind of understand why it was removed. Not everyone will be using the portable aspect of the Switch, and so for them it would be a wasted feature, but we don’t think it should have been a concern for Nintendo. Even with StreetPass, depending on where you live, you might have only bumped into someone once in a blue moon, so the feature was almost certainly overlooked by some of the base. players. But for those who have used and loved it, it sucks that the Switch never continued like this.

It shouldn’t be too difficult for Nintendo Switch to implement StreetPass, either. The feature worked over local Wi-Fi, which the Switch already uses to connect to other systems for multiplayer games. Now the green light that indicates when you’ve passed someone wouldn’t be possible because the Switch doesn’t have an external light, but the actual act of connecting two devices, even in standby mode, is there.

The next step would just be to have a few small teams develop games that StreetPass could work with. Potentially Nintendo doesn’t want to spend any money developing small apps like this, but we think it would be beneficial to encourage gamers to take the Switch with them. The Switch is a portable device, but it has this gap in its system for features that actually take advantage of it. StreetPass would fill this gap perfectly.

Recently, we voiced the opinion that the Switch could do with a few more external customization options, and you could argue that no Nintendo console has delivered this sort of thing better than the 3DS (well, the New 3DS in particular. , not the XL model). The concept of exchangeable cover plates was a revelation (at least in the Nintendo Life office, anyway) and went a long way in making each console as unique and individual as the person who owned it. So it’s a shame that Nintendo didn’t include a similar mechanic in the Switch or Switch Lite; a removable back cover would have allowed for a small (but significant) degree of cosmetic customization.

As we replayed 3DS before writing this feature, we really remembered how fun some of these apps and features were and how much charm they added to the system. There are even more features than what we have mentioned so far, like the Nintendo badge arcade which helped gamers customize their 3DS beyond themes, and simply the ability to change the order in which the software is placed or the amount of software that appears on screen at a time. All of this made the 3DS more than just a gaming system, but more of a little media box that was personalized to you, and that’s something the Switch, in all its good points, failed to pull off. to do.

There is still time for Nintendo to address some of these flaws; it’s never too late to make the Switch even better than it already is. While it’s important to always look to the future, sometimes it makes sense to also look back and borrow from the successes of predecessors, like the 3DS.

Ten years later, the Nintendo 3DS is an unsung hero