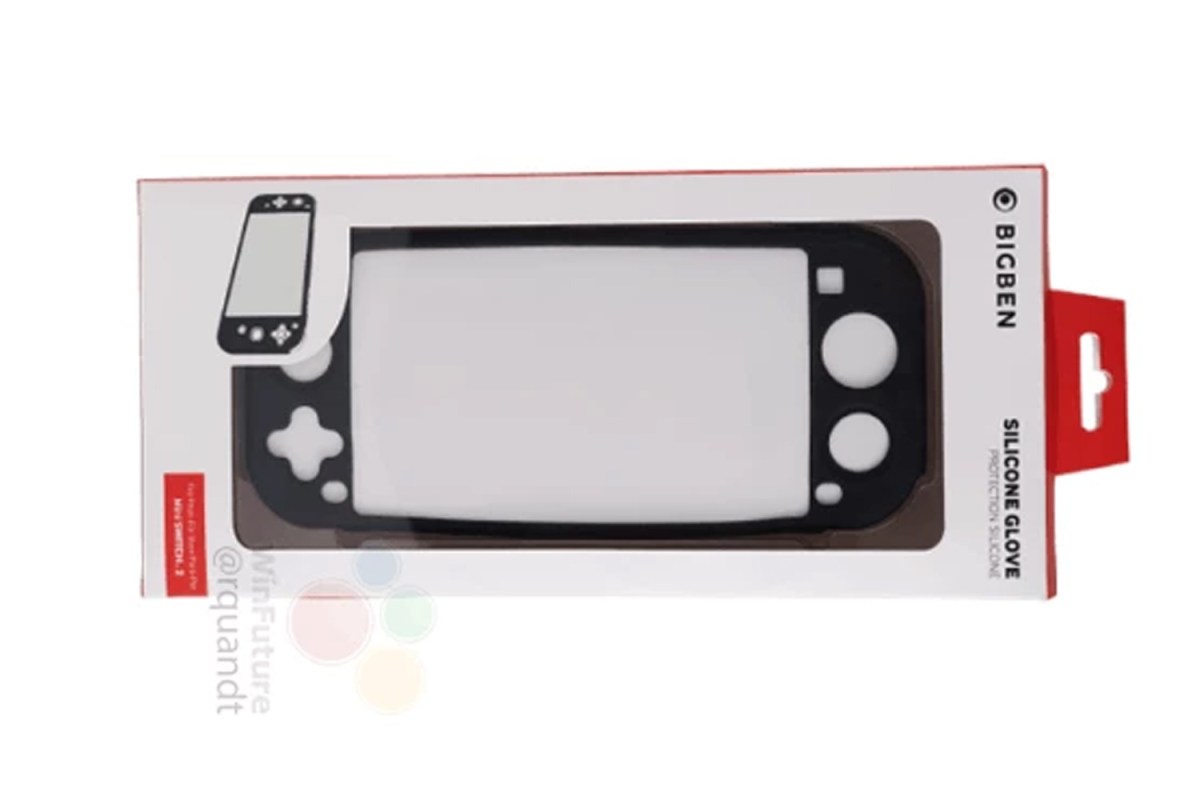 Switch Mini ‘leak’ gives us another look at the new, cheaper Nintendo console

A NEW more portable Nintendo Switch is on the way, and reports say accessories for it are already in production.

Popular accessory maker BigBen leaked from tech site WinFuture shows what they claim to be a silicone case for the new, cheaper handheld console.

The report contains two images: one of a new silicone case in a box with a label stating that it is a “Mini Switch 2”, and a second image that claims to show the product in more detail. .

The product shown in the box itself, meanwhile, has holes in new places that match what is expected of the Switch Mini.

This includes a cross-shaped hole for a D-pad on the left side, in place of the current face buttons.

We’ve created a mockup showing you the size of the new device, based on the case in the box – and assuming the controls and visible screen area are the same size.

The change to the left side makes sense, as the buttons on the left joycon are almost used as a D-pad when attached to the console, and are only used as buttons when detached.

This fits perfectly with an earlier product “leak” that purported to be based on “secret” information from Nintendo.

They were from Chinese manufacturer HonSon, which released new accessories for the new console, and included pictures of what they will look like in use.

This second image from the latest leak, however, doesn’t match the product pictured – and in fact, matches the current Switch perfectly.

It follows news last week that new Nintendo hardware was already in production, after analysts previously predicted a mini-Switch was “imminent.”

Honson claims that the portable Switch, which does not yet have an official name, will be “slightly smaller” than the current version.

The renderings seem to show that the new Switch has the controllers built into the side, just like with a normal handheld console.

With the current Switch, these controllers can be detached from the sides and used as simplified individual controllers, or snapped together to be used as a more traditional gamepad.

Honson says they plan to “tweak the model to make sure it can fit the console perfectly” once it’s officially revealed.

Renderings seem to show that the device will also lose the kickstand present on the current Switch – which makes sense, given that this is only useful if the controllers are detached.

There is actually not just one but two new Nintendo Switch consoles already in production, according to other reports.

The Wall Street Journal complaints This one is a revamped version of the current Switch that will look very similar but with a few internal upgrades, while the other is a lighter, cheaper, and more portable version.

The Switch is a hybrid console that can be played plugged into your TV with a normal controller, or in portable mode with controllers clipped to the side.The cheaper version will have a “new look” according to the WSJ, with some analysts suggesting it could ditch the hybrid nature altogether.

That would make sense, as Nintendo effectively stopped making games for its DS line of handhelds.

The 3DS launched around the same year as Sony’s Vita, which is about to turn off its life support.

Nintendo has promised to keep making and shipping 3DS consoles, but with flagship franchises like PokÃ©mon moving to Switch, it’s hard to see how long that can last.

Rumors of new Switch consoles in development have been around for some time, with early reports indicating that they were due in March of this year.

This is the first time we have heard of their production.

Along with the news comes the revelation that Nintendo is moving all Switch production from China to Southeast Asia.

This applies to the current model and the two new versions, according to the WSJ, and it is a step taken by Nintendo to avoid being caught in the crossfire of Trump’s trade war with China that would otherwise force the Americans. to pay more for their consoles.

Will it be the Switch 2?

NO. These two new switches will run the same software as the old ones.

They also won’t have any seriously improved abilities, but they may have different strengths and weaknesses compared to the current version.

The built-in display is likely to be an improvement over the current offering, as display technology has evolved quite rapidly since the Switch first went into production.

As we gear up for the PlayStation 5 and Xbox Project Scarlett and all the fancy graphics upgrades they promise, we’re not expecting the Switch 2 anytime soon.

The Switch itself launched years after the PlayStation 4 and Xbox One when Nintendo ditched the ill-fated Wii U and is on a completely different upgrade cycle.

E3 may not have brought any new consoles to Nintendo fans last week, but it did bring some good news.

A surprise sequel for Legend of Zelda: Breath of the Wild has been announced, while Nintendo has given fans their first glimpse of Animal Crossing: New Horizons.

This latest game will unfortunately not be released until 2020, but it looks like it will be worth it.

We pay for your stories! Do you have a story for The Sun Online press team? Email us at [email protected] or call 0207 782 4368. We pay for videos too much. Click here for Download yours.